Posted by prangecollection on March 1, 2020 in Treasures

We are so accustomed to typing everything on a computer, that it’s hard to believe that just 70 years ago everything was handwritten. The handwritten manuscripts in the Prange Collection are fascinating for just that reason.  It must have been particularly time-consuming for authors who had to submit their manuscripts to the Civil Censorship Detachment (CCD) for pre-censorship review.  There were no copy machines for this purpose (which, again, for most of us is hard to believe), so they would have to hand-write a duplicate copy to submit. Below are some examples. 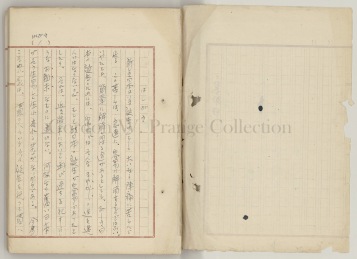 Posted by prangecollection on February 26, 2020 in Awards

We are happy to announce that the lunchtime talk by Timothy Smith, Ph.D. candidate at the University of North Carolina, Chapel Hill and recipient of a 20th Century Japan Research Award, is now available on the Prange Collection’s YouTube channel.

His talk was entitled, “Clean Minds, Messy Realities: Shifting Trends in Contemporary Tenrikyō.”  It was delivered on October 8, 2019 at the University of Maryland.

Recipients of the 20th Century Japan Research Awards for 2020

Posted by prangecollection on February 22, 2020 in Awards

Congratulations to the following recipients of the 20th Century Japan Research Awards for 2020!

The Award, first offered in 1999, is co-sponsored by the Nathan and Jeanette Miller Center for Historical Studies and the University of Maryland Libraries.

Each year these partners accept applications for grants to support research in the Gordon W. Prange and East Asia Collections on topics related to the period of the Allied Occupation of Japan and its aftermath, 1945-1960.

Holders of a Ph.D. or an equivalent degree are eligible to apply, as are graduate students who have completed all requirements for the doctorate except the dissertation.  The competition is open to scholars in all parts of the world and from any discipline, but historical topics are preferred.

See this page for more details about the Award.

An Interview with Earl Roy Miner from the Marlene J. Mayo Oral Histories

Posted by prangecollection on February 21, 2020 in Oral Histories

This post is the eleventh in a series featuring interviews from the Marlene J. Mayo Oral Histories.  Currently, 29 of the oral history transcripts are available online.  The remainder are available onsite in the Maryland Room, the reading room for Special Collections and University Archives at the University of Maryland.  For other featured oral histories, see this page.

Today is Earl Miner’s birthday!  Marlene Mayo interviewed Professor Earl Miner, a scholar of Japanese and early modern English literature, on August 19, 1980. She was particularly interested in his experiences in the Japanese-language program at the University of Minnesota and his assignment to Allied Occupied Japan.

Born in Marshfield, Wisconsin on February 21, 1927, Miner graduated from high school at 17 and signed up for the Army Specialized Training Program.  In 1944, he attended a Japanese-language program at the University of Minnesota, whose chief purpose was to train participants as interpreters.  He was sent to Japan in March 1946 as an interpreter, Private First Class.  Based in Shikoku and then Kyushu, he was a part of a team that traveled to towns and villages to collect information on population, food and water supplies, fuel and clothing, general conditions or problems, and the attitude toward the Occupation Forces. He was discharged from the Army and worked as a civilian in the military government headquarters in the Economic Section in Nagoya (November 1946 – November 1947). In that capacity, he was primarily responsible for taking inventory of machinery in factories and ensuring that land reform was being carried out.  He recalls having informal conversations with Japanese about mandated changes to the educational system by GHQ/SCAP and about democracy in general.

Countdown to the 2020 Olympics in Tokyo! – Part II

Posted by prangecollection on February 16, 2020 in Treasures

In the second in our series, Countdown to the 2020 Olympics in Tokyo!, we’re showcasing materials about Mikio Oda/織田幹雄, the first Japanese to win an Olympic gold medal (triple jump event at the 1928 Olympic games in Amsterdam). See Part I here.

Below is a list of items related to Mikio Oda.

Orinpikku monogatari covers the history of Olympics with several photos of athletes, particularly those in track and field.  In the preface, Oda states that the Olympics represent half of his life.

Rikujo kyogi contains detailed rules for track and field programs, the history of track and field events in the Olympics, and Oda’s reflections on his life as an athlete leading up to the Amsterdam Olympics.  He concludes with this passage:

Posted by prangecollection on February 9, 2020 in Treasures

The 92nd Academy Awards are just around the corner! They’ll be televised on Sunday, February 9!

This is our second installment of the year on Oscar-winning movies. Seventy-five years ago, Gaslight (Japanese translation – ガス燈), starring Ingrid Bergman and Charles Boyer, was nominated for ten awards and walked away with two wins: Best Art Direction and Best Actress in a Leading Role for Bergman.

The movie is based on the play, Angle Street, by the English writer, Patrick Hamilton. There have been multiple stage and screen adaptations of the play.

Posted by prangecollection on February 2, 2020 in Treasures

In the lead-up to the 2020 Oscars (to be televised on February 9), we’ll be featuring two award-winning films. The first is “Going My Way” (1944), starring Bing Crosby as a young priest, Father Charles O’Malley, newly assigned to the parish of St. Dominic’s Church in New York City.

Father Fitzgibbon, the long-time pastor of the church, is a bit put off by the informal style of the younger priest, who he assumes is his new assistant. But the truth is that Father O’Malley was sent by the bishop to take over the affairs of the parish, while Fr. Fitzgibbon would remain as pastor.

Throughout the movie, there are generational conflicts between the two priests, some problems experienced by the parishioners, such as eviction and youth gangs, and some financial problems for the church itself.  But with Bing Crosby in the cast, you will not be surprised that there will be several musical numbers to balance out all of the drama.

That brings us to the point in the discussion where we must talk about the many, many awards this movie received.  It was nominated for ten Oscars and won seven of them, including Best Picture, Best Director, and two for Best Writing.

Then it gets interesting when we get to the acting categories.  Both Bing Crosby and his co-star, Barry Fitzgerald (who played Fr. Fitzgibbon) were nominated for Best Actor, the first and only time this happened.  Crosby won that award, but Barry Fitzgerald was also nominated for Best Supporting Actor and won that one. That was the first time an actor was nominated for two different awards for the same role.  “Going My Way” was also the first film to win Best Picture at the Academy Awards and The Golden Globes.  There are so many “firsts” for this movie, it’s hard to keep track.

In the Prange Collection we have one book entitled, Going My Way/わが道を往く (Prange Call No. PN-0236), about this movie.  Click the images below to view selected pages.

Two stills from the movie

Two more stills from the movie

Lyrics of the title song, “Going My Way.”

The last scene of the movie.