Posted by prangecollection on December 3, 2017 in Treasures

This post is Part X in a continuing series on a portion of the Prange magazine collection that is now available in digital form onsite at the National Diet Library of Japan (NDL). (See the series in Featured Magazines.)

In this post, we are featuring magazines published in Nagasaki Prefecture.

The inaugural issue of Doshi/同志 was published in March 1949 by Sasebo Shoko Koto Gakko Kogyobu Denkika Doshikai/佐世保商工高等学校工業部電気科同志会.  It was a classroom newsletter that covered a variety of topics and included essays and a quiz.  It encouraged the involvement of all of the students, which was reflected in a report on how the name of the newsletter was decided.  This is the only issue held in the Prange Collection. It is unclear whether there were subsequent issues.  Accompanying this issue is a piece of an envelope that contained correspondence from the editor to the Civil Censorship Detachment (CCD).

Goto Seinen Minshu Hyoronkai/五島青年民主評論会 published Chishio/血潮 in March 1948.  It included a message from E. N. Meldal, who worked in the Education Department of the Nagasaki Military Government.  He also wrote a short essay about an exchange between a Japanese antique store owner and a GI. 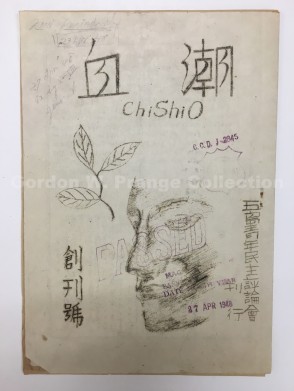 Danketsu/団結 was a labor union newsletter published by Sasebo Kowan Rodo Kumiai/佐世保港湾労働組合.  The first issue was marked with “1 Info” by the censor.  There were also a few check marks and a note stating, “Introduction of foreign capital into Japan” in the essay, “Analyzing Inflation after the War.”  The second issue is formatted more like a newspaper.

In the first issue of Chikuro/地区労, the censor also wrote “1 Info” on the essay, “Make Shipping Industry Socialized.”

One comment on “Featured magazines published in Nagasaki Prefecture”