Censorship of Fraternization during the Allied Occupation of Japan (Part III)

Posted by prangecollection on September 10, 2017 in Treasures

[This is a guest post written by Niko Schultz, a Student Assistant in the Prange Collection.] This is the last post of the series of the censorship of Fraternization during the Allied Occupation of Japan.  See Part I and Part II here.

In addition to “Chieko in Trouble,” the May 1946 issue of The Top also contained a story called “Temporary Wife,” which was also censored for its depictions of fraternization.

“Temporary Wife” described a business in which an American GI could purchase the services of a young Japanese woman as a concubine during his stay in Japan. Although the solicitation of Japanese prostitutes by American GIs was prohibited during the Occupation, it did take place. SCAP censored any references to such transactions on the grounds that they would “disturb public tranquility.”

“Temporary Wife” was suppressed by the CCD because its entire premise was based on fraternization and solicitation of sex workers. The examiner wrote that the story “disturbs public tranquility” and constituted “destructive criticism of Allies.” In particular, the examiner objected to two passages describing the “temporary wife” businesses and how they operated. One passage explained that a young Japanese woman’s services could be purchased for 70 dollars; the other referred to a system in which GIs could purchase gold, silver, and copper medals and exchange them for Japanese women.

The CCD examiners considered the tone of the story to be “very detestable” and claimed that is was rife with “sensational revelation” and had “no value to educate people.” The article portrayed the conduct of American GIs in Japan in a negative light and could have provoked outrage among readers. In order to avoid anti-SCAP sentiment, the CCD suppressed the entire story; no part of it was allowed to be printed in the final version of the magazine. 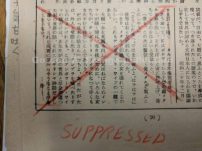 In spite of SCAP’s non-fraternization policy, however, relationships between GIs and Japanese women were not infrequent. In order to avoid “disturbing the public tranquility,” the CCD censored any references to such fraternization, claiming that such stories misrepresented the actions of American soldiers.

Publications censored for this reason, such as the three articles discussed in this blog post, can be found in the Prange Collection. If you are interested in learning more about fraternization during the United States Occupation of Japan, please consider using the Prange Collection for your research.

← Censorship of Fraternization during the Allied Occupation of Japan (Part II)
A Talk by Mr. Robert Hegwood (University of Pennsylvania) →